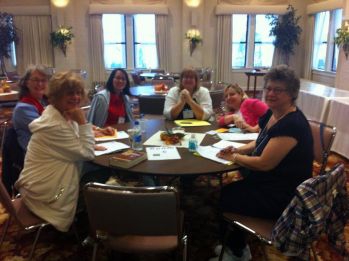 Word Weavers (originally Northland Writers Critique Group) was formed in March 1997 when five writers with a heart for God gathered around a dining room table and expressed their hopes for publication. The five got to work to learn the art of critique. In time, publication came for them and those who had joined them. Eventually the numbers grew, forcing the group out of the home environment and into a larger facility. Carmen Leal, who birthed the group, moved from Central Florida to Naples, Florida and Eva Marie Everson began facilitating.

In 2007, Eva Marie named Larry J. Leech II as the next president. Together they developed the current plan of term limits for members on the newly—and aptly—named Leadership Team. Under Larry’s leadership, the frequency of guest speakers increased, and membership numbers reached new heights. They launched six other Word Weavers chapters nationally, and the vision for the National Leadership Team was organized. Larry asked Eva Marie and Cheri Cowell to join him with this endeavor.

In 2010, Word Weavers became the critique arm of the Jerry B. Jenkins Christian Writers Guild. During its time with CWG, Word Weavers grew to thirty-one chapters and nearly 500 members, many of whom are bestselling, award-winning authors of books, magazine articles, devotionals, etc. Then in 2012, the leadership of both Word Weavers and CWG realized that Word Weavers best served its members as a not-for-profit organization.

Within a few weeks, Word Weavers International, Inc. was established. Eva Marie became the new president of the international traditional groups and Mark Hancock, (then) president of Word Weavers Volusia County, became vice president. Four mentors were drawn from the presidential membership to help oversee and serve the chapter presidents. Over time, that number has expanded. Then, a few years later, realizing the need for those who could not travel to traditional groups or those who did not have a traditional group nearby, Word Weavers formed “online groups” initially using Skype, then Google Hangouts, and finally purchasing licenses with Zoom. Today, Tina Yeager serves as the Director of Traditional Groups while Susan Simpson serves as the Director of Online Groups.

In the latter months of 2012, Word Weavers took over Florida Christian Writers Conference and then, a few years later, they formed North Georgia Christian Writers Conference, which folded during the COVID pandemic. Today, Bonnie Beardsley serves as our Facebook social media contact, Stephanie Pavlantos as our Pinterest contact, and Eva Marie Everson oversees both the Twitter and Instagram accounts. Since 2022, Eva Marie has also served as the Word Weavers International CEO, Taryn Souders serves the President of Operations, Janis Powell serves as our membership administrator, Jessica Everson as our new chapter liaison, and Elenna Souders as data entry administrator.

Word Weavers International, Inc., is excited to see what is around the bend for our writers. We’d love you to be a part of the story. 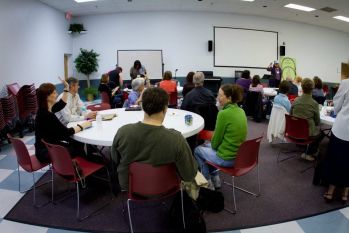 Statement of Faith and Values for Word Weavers International

We believe in the Scripture of the Old and New Testaments as inspired by God, and that they are the supreme and final authority in faith and life.

We believe in one God, eternally existing in three persons: Father, Son, and Holy Spirit.

We believe that Jesus Christ was begotten by the Holy Spirit and born of the Virgin Mary and is true God and true man.

We believe that man was created in the image of God; that he sinned and thereby incurred not only physical death but also that spiritual death which is separation from God; and that all human beings are born with a sinful nature and, in the case of those who reach moral responsibility, become sinners in thought, word and deed.

We believe that the Lord Jesus Christ died for our sins according to the Scriptures, as a representative and substitutionary sacrifice, and that all who believe in Him are justified on the ground of His shed blood.

We believe in the resurrection of the crucified body of our Lord, His ascension into heaven, and His present life there for us as a High Priest and Advocate.

We believe that all who receive by repentance and faith the Lord Jesus Christ are born again by the Holy Spirit, and become children of God.

We believe in the spiritual unity of believers in the Lord Jesus Christ.

We believe that all human life is sacred and created by God in His image. Human life is of inestimable worth in all its dimensions, including pre-born babies, the aged, the physically or mentally challenged, and every other stage or condition from conception through natural death. We are therefore called to defend, protect, and value all human life (Ps. 139)

We believe that any form of sexual immorality (including adultery, fornication, homosexual behavior, bisexual conduct, bestiality, incest, or use of pornography) is sinful and offensive to God (Matt. 15:18-20; 1 Cor. 6:9-10).

We believe that every person must be afforded compassion, love, kindness, respect, and dignity (Mark 12:28-31; Luke 6:31). Hateful and harassing behavior or attitudes directed toward any individual are to be repudiated and are not in accord with Scripture nor the doctrines of Word Weavers International.

We require that all who hold recognized leadership positions in Word Weavers International agree to and abide by these values. Members have no such obligation, but recognize the position of the organization and, in submitting to membership, agree that they will not propose, either in submitted materials, critique, or conversation any viewpoint that would conflict with these values.

Inasmuch as it is understandable that our writings will sometimes deal with these contrary issues, the resultant intent of the writing will be to recognize the reflected values as contrary to sound biblical doctrine when they are such, and to uphold the biblical values as rightful and authoritative.